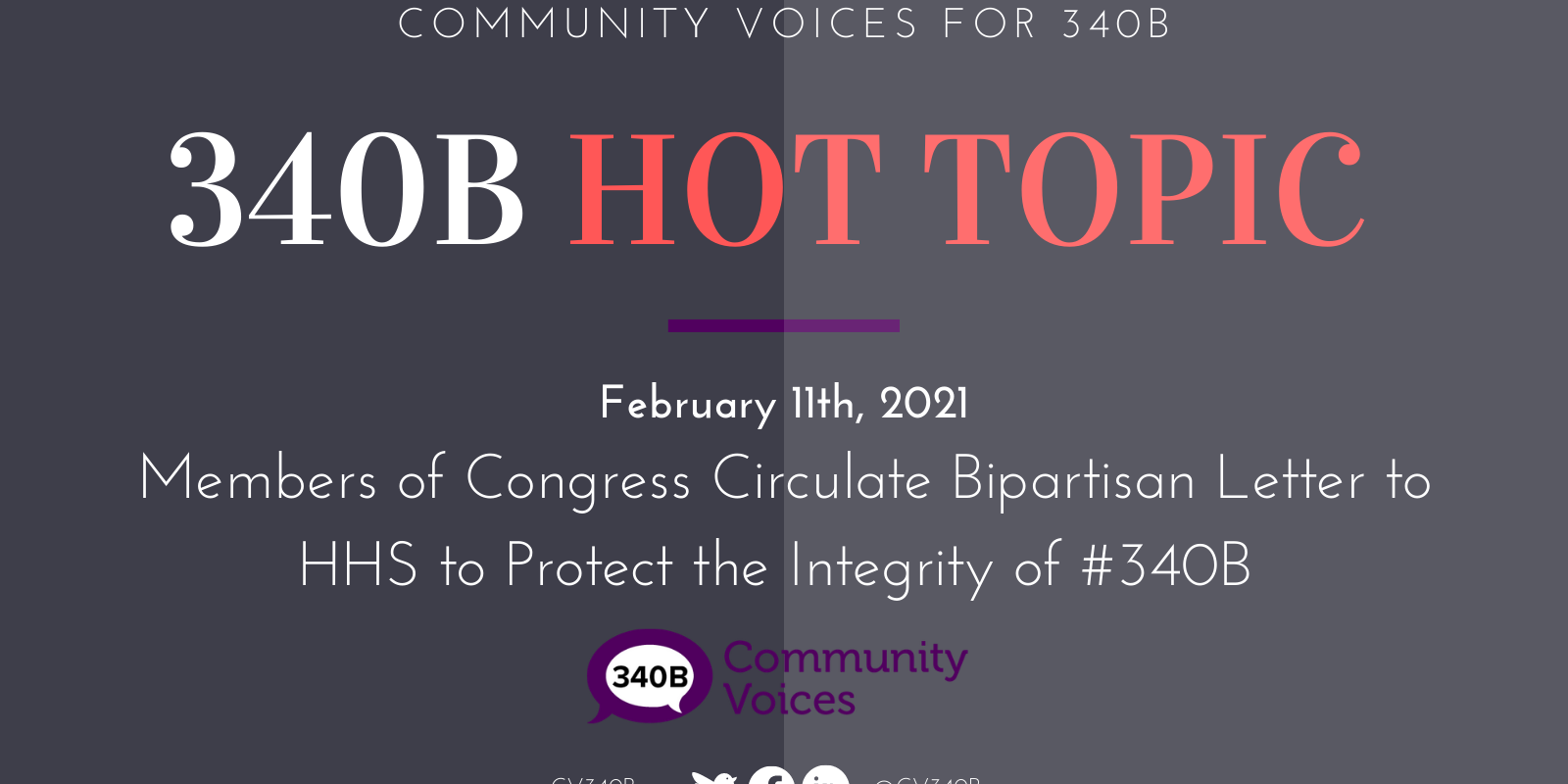 This week, Representatives Spanberger (D-VA), Axne (D-IA), McKinley (R-WV), Johnson (R-SD), Katko (R-NY), and Matsui (D-CA) began circulating a bipartisan sign-on letter that calls on Health and Human Services (HHS) Secretary nominee, Xavier Becerra, to address drug manufacturers’ refusal to provide 340B drug discounts to covered entities utilizing contract pharmacy arrangements.  RWC-340B was a key contributor to the development of this letter.  Attached is the “Dear Colleague” letter asking other members of the House to add their names to the sign-on letter.

Note that the sign-on letter is only circulating in the U.S. House; there is currently not a Senate companion to the letter.  The letter thanks Mr. Becerra for his efforts to protect 340B safety net providers while serving as California Attorney General and urges him to take immediate action against the drug companies that are undermining the 340B program by withholding 340B pricing on contract pharmacy drugs.

Specifically, the letter requests that HHS hold manufacturers accountable for violating their obligations under the statute; require manufacturers to refund covered entities for unlawful overcharges; halt manufacturers’ attempts to unilaterally overhaul the structure of the 340B program; and seat the Administrative Dispute Resolution panel to adjudicate disputes within the program.

Please fee free to pass the below sign-on letter and link onto your Member of Congress.

Department of Health and Human Services

Congratulations on your nomination for Secretary of the Department of Health and Human Services (HHS). We write today as leading congressional proponents of the 340B drug discount program to applaud you for your work in protecting 340B safety net providers and to ask you to take immediate action to ensure that manufacturers are prohibited from imposing unilateral changes to the program in direct conflict with Congressional intent and decades of written guidance.

We applaud you for your December 14, 2020 letter with 27 other attorneys general urging former HHS Secretary Azar to protect the 340B program.[1] We believe that your letter and the Department’s Office of General Counsel’s advisory opinion, released on December 30 and described below, represent some of the most compelling legal arguments for the actions we ask you to take.

As you know, Congress enacted the 340B Drug Pricing Program in 1992 following the creation of the Medicaid Drug Rebate Program. In order for their drugs to be covered by Medicaid, manufacturers are required to offer discounts to certain public and nonprofit health care organizations known as covered entities, including Federally Qualified Health Centers, Ryan White HIV/AIDS Clinics, Medicare/Medicaid Disproportionate Share hospitals, rural hospitals, and children’s hospitals. According to the legislative history, Congress’s intent in creating the discount program was to “stretch scarce federal resources to reach more eligible patients and provide more comprehensive services.”

The 340B statute requires drug manufacturers to “offer each covered entity covered outpatient drugs for purchase at or below the applicable ceiling price.”[2] There are no provisions in the statute that allow manufacturers to set conditions or otherwise impede a provider’s ability to access 340B discounts. The Health Resources and Services Administration (HRSA), which oversees the program, has indicated on multiple occasions, dating back to the early years of the program, that the 340B statute requires manufacturers to provide 340B discounts to covered entities when covered entities purchase drugs to be dispensed through contract pharmacies on a covered entity’s behalf.[3]

HHS has reviewed manufacturers’ refusals to provide 340B discounts to covered entities’ contract pharmacies and found them to be unlawful. In a December 30th 2020 advisory opinion, then-general counsel Robert Charrow wrote, ““[T]he core requirement of the 340B statute…is that manufacturers must “offer” covered outpatient drugs at or below the ceiling price for “purchase by” covered entities. This fundamental requirement is not qualified, restricted, or dependent on how the covered entity chooses to distribute the covered outpatient drugs.”[4]

Unfortunately, publishing the advisory opinion has not deterred manufacturers from continuing with unlawful price hikes. Many covered entities are struggling with severe financial losses as a result of the COVID-19 pandemic. They cannot afford to be unfairly targeted by large pharmaceutical corporations or be forced to pay higher up-front costs for the drugs their patients need.

Furthermore, the information technology company Kalderos has allied with manufacturers to change the 340B program from one of upfront discounts to post-sale rebates, a change that would greatly increase costs for covered entities and give manufacturers tremendous leverage over covered entities. Such action is inconsistent with HRSA’s long-standing guidance that the 340B program is an up-front discount program.[5]

Your December 14th letter called on HHS to “address drug manufacturers’ unlawful refusal to provide critical drug discounts to covered entities.” Consistent with that letter, if confirmed, we urge you to:

1. Begin assessing civil monetary penalties on manufacturers that deny 340B pricing to covered entities in violation of their obligations under the 340B statute;

2. Require manufacturers to refund covered entities the discounts they have unlawfully withheld since 2020;

3. Halt, through guidance or other means, any attempt to unilaterally change 340B upfront discounts to post sale rebates; and

As you state in your December 14th letter, “Each day that drug manufacturers violate their statutory obligations, vulnerable patients and their health care centers are deprived of the essential healthcare resources Congress intended to provide.” Thank you very much for your prompt consideration of these important matters.